In the last week Ichiro, Tim Lincecum, Carlos Gonzalez, Jonathan Lucroy, Mike Moustakas, and Lance Lynn have all signed. On Sunday, Jake Arrieta joined them, agreeing to a three year, $75 million contract with the Phillies. That’s an average of a signing a day! Of Major Leaguers, to Major League contracts! The dominoes are certainly falling. Finally.

Arrieta’s signing comes with curiosities. Or maybe more accurately, concerns. He has more than 1,100 professional innings on his arm. From 2014-16 he had a nasty-good run. Toward the end of it, and through 2017, his velo started to dip. Pitch Info tells us he lost two mph off his sinker between 2016 and 2017. His Ks have slightly gone down and his walks have slightly risen. At 32, he’s at an age where it’s fair to begin wondering how much further he could fall, and how quickly.

How does he adapt? Arrieta might be past his peak prime while with the Phillies, but what will he be? What can he be, and what adjustments might it take to get there? The way hitters manufactured production off him last year could help us find a path to that answer. 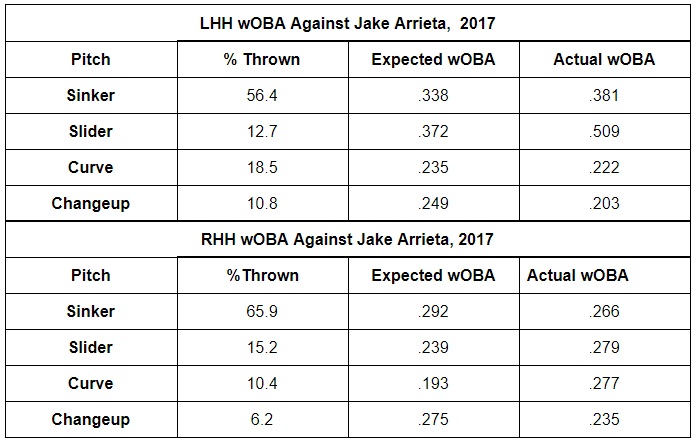 Half of his actual weighted on base averages were higher than what Statcast tells us we should have expected. Arrieta arguably has a skill of inducing weak contact, so what this would seem to suggest is that sometimes, when hitters put the ball in the air against him, he just gets beat. The overall numbers were lower during his run of dominance between 2014 and 2016, but the actual production similarly beat what could’ve been predicted based on the launch angle and exit velocity of balls in play against him.

Beyond that, though, we see a notable split in performance against lefties and righties last year. A single year of batter splits can be dubious, but consider this the New Arrieta; one whose age is revealing diminished skill. Lefties really went to town against his sinker and slider last year. The two pitches break in opposite directions, which makes them excellent sequencing buddies from the same tunnel, but things didn’t play that way for Arrieta last year.

One reason why could be because of the break on Arrieta’s slider. Per Brooks Baseball, he lost .7 inches of horizontal break and .53 inches of vertical break on it. What does that look like? I’m glad you asked.

Thanks to Statcast’s incredible, fantastic, super fun new 3d pitch visualizer, we can see how that loss of break in Arrieta’s slider could have impacted its performance against lefthanded hitters.

The slider is in red circles. His sinker is in black squares. The ones closer to the mound mark the point at which batters could first recognize the pitch. The ones closer to the plate tell us when batters would have needed to commit to swinging. In 2017, lefthanders saw Arrieta’s slider sooner and were able to decide on swinging against it later than his sinker. Less movement, plus less velo, plus the same tunnel means hitters faced a pitch with very little bite. And that’s how an absurd .509 wOBA happens.

From 2014-16, lefties only generated a .240 wOBA against Arrieta’s slider. Last year’s numbers are probably an outlier, but if the pitch continues to flatten out it could really threaten the viability of one of his weapons. He could consider turning the pitch into more of a true cutter to deliberately make it run further inside on lefties, or he could use it less in favor of the curveball. There’s also a chance he could take a little off the slider to widen the velocity gap with his fastball, but deliberately throwing slower in this context doesn’t seem ideal.

Arrieta’s going to be an intriguing piece to watch on an increasingly intriguing team. The Phillies are showing they’re getting ready to contend, and his evolution as a pitcher could be key to making it happen.