And yet, he’s still on pace for about 4.5 fWAR, which still makes him one of the game’s top assets. He continues to be awesome, but a different kind, and different enough to ask “what’s changed?”

There are some significant differences from last year to this year in Betts’s contact profile. In general, he’s swinging less. Like, a lot less. Last year he took the 20th-most pitches in the league. This year, he’s taking the 4th-most. He’s also swinging at fewer pitches in the zone, while making more contact when he goes outside it. That’s an odd combination for a player so disciplined at the plate. It suggests pitchers have adjusted to Betts and that he might have picked up on it, but that he hasn’t quite countered yet.

And though it helps us see what’s fueling a lower triple slash this year and, by matter of course, lower WAR, it doesn’t tell us how pitchers have adjusted to Betts. He’s seeing just about the same pitch mix this season as last, save for one thing. He’s getting about 22% sliders this year, or an additional 5% more than in 2016. 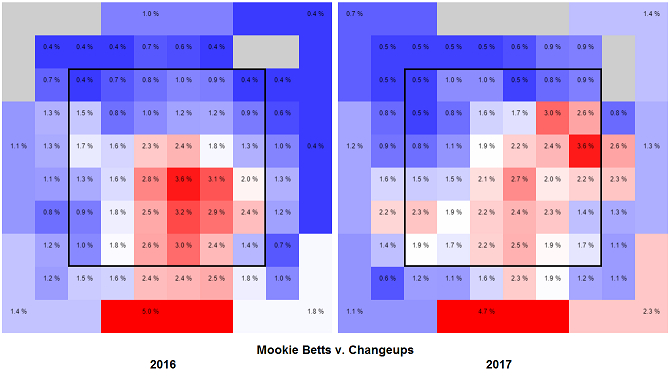 Changeups are also giving Betts considerable problems, and it could be because he’s been oddly less patient with them than other offerings in 2017. Despite seeing almost the same exact amount this year as last, and swinging at them at a nearly identical rate, his weighted pitch value against the offering is more dramatic than any other. He’s managing an unimpressive -.43 mark this season. In 2016? It was at 3.67. He’s gone from waiting for changeups to show up in his wheelhouse to swinging at it freely. It’s extremely uncharacteristic for Betts, and it’s yielded just a .260 wOBA against the pitch.

Consider how the changeup is designed to induce weak contact, how it can often fade and drop away toward the lower outside corner of the zone, and how sliders drive to the same portion of the plate. Pitchers seem to have found a way to sequence their stuff against Betts to thoroughly influence the damage he can create with the bat.

This is particularly true with righthanders, against whom Betts is batting only .253 in 2017. Last year, he hit .331 against them. And because the league features about two and a half as many righthanders as southpaws, the trouble for Betts becomes emphasized that much more.

Mookie Betts is still exceptional. He’s still demonstrating elite control of the zone, as evidenced by a walk rate that equals his K rate. But there appear to be plate adjustments that will be necessary for him to make if he’s to return to being one of the game’s absolute best.